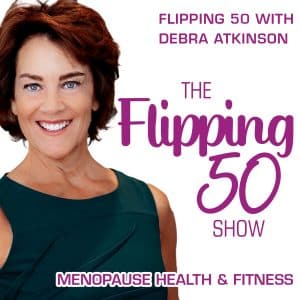 In this episode I share 3 menopause fitness makeovers. Without disclosing or intruding on client confidentiality these three represent unique situations not uncommon in the 25 years I’ve been coaching midlife women. In the last decade, I’ve grown far more knowledgeable about how to help and the science behind both the stuck and the tools to get unstuck.

05:00 First let’s make it clear, exercise doesn’t replace or create hormones where you’re not making them at all.

However, a poorly planned or carried out exercise routine can:

A well-planned one can help optimize hormones.

The collective “hormones” is a term you should begin to run from, or ask pointedly, which hormone do you mean?

Because fiercely competitive yet vaguely educated trainers are using the blanket term themselves not knowing what it they mean.

For nearly a decade we’ve been serving both women and the trainers and health coaches that serve them, about cortisol being the pivot point for many of the problems that exist for women in midlife including weight gain, lack of muscle tone, and specifically belly fat.

However, with hormones and exercise, you must consider the interplay of hormones, exercise, and lifestyle. Let’s dive into these Menopause fitness makeovers.

Woman #1: It’s Not Working on Her Own

A woman comes to a trainer and wants to lose weight and fit into her clothes better. She’s always tired. What she’s doing isn’t working.

Trainer’s response is to put her in a bootcamp or a bootcamp-like training routine. Likely solutions depending on the woman’s budget were:

Either do a 4x a week bootcamp plus instructions for exercise on the weekend or meet with the trainer 3x a week for workouts and do the rest on her own.

The trainer suggests a caloric intake based on a formula from an online calculator.

The trainer has the client use a food and exercise log to show once a week.

This is a calories-in-calories-out formula. A formula for disaster, I might add.

It’s Like Flirting with Dieting: It Works for a While

I can’t deny for some women this works, for a few minutes. Maybe months. The high intensity workouts are an adrenalin rush, and the weight loss feels empowering. Until that moment when the lack of nutrition, ignoring ever-present micronutrient needs that increase with exercise, and the reliance on caffeine or giving in to cravings begins to take over.

The weight that came off, isn’t sustained because fatigue, and injury tend to happen more than they don’t. During times when a healthy athletic woman can have a disrupted schedule because of life and sustain a fitness level, someone with this underlying fatigue, will gain weight and realize there’s less muscle now, more fat, and she’s older, trying to gain muscle back.

The trainer explores the reasons for the constant feelings of tired before adding exercise. There’s a thorough review of lifestyle, food, and exercise. It’s far beyond the health and activity history of trainers fresh from a certification or using the method they’ve used for decades.

The trainer recognizes the signs and symptoms a woman is experiencing and uses them as a basis for modifying small yet effective habits that increase energy and feelings of rest first. Small exercise assignments that lay a foundation for good fitness are involved … without an overhaul of change.

Strength to muscle fatigue in as few days a week as possible is the goal.

That’s key… strength to muscular fatigue in as few days as possible is the goal. More muscle, less breakdown. Less soreness, less fatigue, less risk of injury and more overall caloric expenditure because of the increased strength and stamina.

Though there’s a blueprint for menopause fitness, there’s no one-size-fits-all approach.

1) There is first a process to arrive at the 2) apparently healthy midlife status before applying it. 3) For those that want more… performance, competition, there’s an exchange of traditional “volume” for quality and planned training to increase result with reduced volume of training.

This method determines the effect of calories eaten and calories burned on hormones.

Hormones, not calories, control whether your body burns or stores fat.

Are you burning calories or burning out?

In midlife more than ever, it’s about what the exercise does to your hormones.  Okay, time to move on to the next of menopause fitness makeovers in this episode. 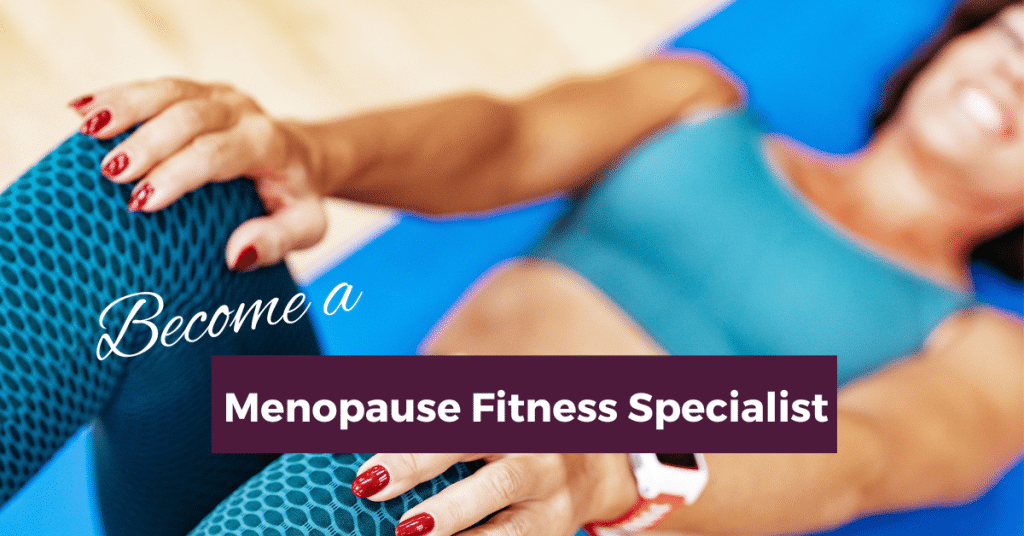 A woman follows the old way of reducing calories, and the health-touted plant-based diet along with walking. It works for months. She’s losing weight. She feels euphoric. Until she doesn’t.

She realizes after reading about why this would happen, she’s lost lean muscle. Her metabolism is slower. She’s postmenopause by now and has experienced the accelerated loss of muscle (and bone) that can happen during the menopause transition without adequate muscle protein synthesis to overcome muscle protein breakdown.

She struggles to change her idea of “healthy eating.” She still sees a bagel and fruit as a healthy option for breakfast, not realizing that the spike in blood sugar and insulin put her in fat storage and determine a trajectory for the day. She’ll experience more hunger, more cravings, and a need for more caffeine.

She even resorts to 5-hour energy to sustain the ability to focus and energy to finish projects.

She’s commended for her goal to reach 10k steps daily, even though she doesn’t quite reach it, she’s conscious of her movement.

The trainer asks her if she wants to continue plant-based diet and has her consciously adding protein to each meal using smart combinations.

She’s asked to abort an emphasis on step count in favor of strength training to regain lean muscle and improve metabolism, as well as her energy level.

There’s a discussion about the need to use caffeine for energy. A healthy, vibrant woman with access to high quality food and options for activity should have energy. If that’s not the case, there are a) several lifestyle factors to change b) tests to look at that could help compliance of those changes. She’s asked where she’d rather start.

Daily tracking of her energy level in response to her food and exercise begins asap.

Even in the presence of proof it’s not working, we sometimes resist the very obvious need for change. We’re used to thinking that in order to get what we want we have to cheat the system or have a short cut. The short cut is simple habits of the right nutrition and exercise for the phase of life you’re in.

That’s not suggesting you settle. You can have the energy and look and feel amazing at this age… not “for your age,” just simply period. A woman with discipline in spades and commitment to routine is gaining weight instead of losing. She’s long past menopause but also a long slave to controlling calories, except when she doesn’t. That is, she is still “being good” or associating good days with eating lower calorie, not “blowing it” and hasn’t really adopted a lifestyle of eating that makes it possible to eat foods that agree with her no matter where she is or who she’s with.

This is where we call this the difference between healthy eating habits and disordered patterns of eating. If we’re talking about a continuum, on the far right then is disordered eating. That’s where anorexia, bulimia (which includes purging via exercise), and compulsive overeating live).

This is an area of distinction we make in the Flipping 50 Menopause Fitness Specialist course. At midlife, we’re back in a situational transition that is often the trigger for greater struggle with disordered eating patterns or eating disorders.

And… it backfires. The woman, already ultra-aware of the number of calories in ever food, now has a light shined on it and wants to accelerate progress. Thinking about food, planning meals, counting and logging every calorie becomes a part-time job.

There’s very little focus on how she feels, how she’s sleeping, whether she’s gaining strength, getting faster or feeling a benchmark workout is easier.

Because meals are so focused on lower calories, between meals she’s hungry and craving. She’s resorting to either empty calories or then taking in high calorie snacks like nuts and seeds instead of eating meals that allow satiety.

The trainer/coach who satisfies menopause fitness makeovers is sensitive to signs of lifelong dysfunctional relationship with food. An agreement to completely abandon tracking and counting calories or points. Instead, the focus is on what to include, or begin to move toward.

There’s no deprivation or gaming with the traditional low calorie diet foods like overuse of cabbage and grapefruit, so commonly included in diet culture.

A focus on building complete meals instead of cutting out things. Gamifying the number of servings of vegetables in a day and the amount of protein at each meal, is helpful.

It’s a curse and a blessing.

The hardest  thing for an overachiever is cutting back on something they feel is part of their identity. If exercise is a form of escape. Not just a source of calorie burning and weight loss that it may have begun as, but thanks to or because of neurotransmitters there s more. There’s a feel-good that comes or a relief of anxiety and lift of depression with exercise that isn’t experienced otherwise. It’s unique for each individual, but it’s a source of control and stable source of calm for those that find this.

Removing any of that can leave someone feeling loss. Like any drug addiction, a negative addiction to exercise can occur. First there many only be the evidence you’re tired, sore, not sleeping as well, or always hungry. There may be the withdrawal from activities with friends because it interferes with exercise or includes foods you don’t eat.

That in itself isn’t a sign of addiction. Because, selfcare may require you to skip breakfast with the family to do your strength training or to miss a dinner.

Later, there’s usually escalation. A 4-mile walk turns into 5, or a once-a-day walk turns into two. Sooner or later the pounding or repetitious use of joints or ligaments without adequate recovery – because rest is hard for someone in this cycle – leads to depressed immunity or injury.

If any of this menopause fitness makeovers resonates with you, I’ll link to the Flipping 50 Café. Enrollment is limited to twice yearly and at that time there is both a monthly and an annual option. Annual at the time of this post for first time first year members is a savings of $239.

There’s no more comprehensive membership for menopause women in the world.

I hope this has been helpful! Leave a comment if you resonated with any of these.

Resources mentioned in this episode: 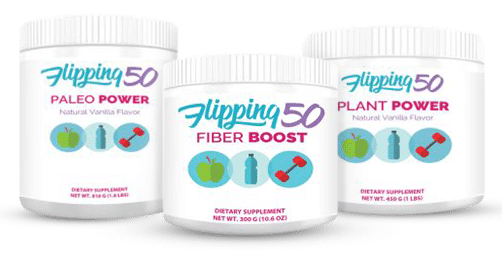