The seat is my triathlon bike seat while it’s perched on a trainer. This year, unseasonably warm weather inspired me to set up on the deck where for four hours I pedaled and watched. It’s something I look forward to so much that I was honestly torn last week when I incorrectly thought the Championships would be broadcast while I was away on a trip. This was a multitasking trip that included working with a consulting client and watching my son play golf: two of my favorite things in the world. Nonetheless, I was dashed for the moments I assumed I might miss the chance to relish in the moments at Kona with both age-group and pro athletes I knew. 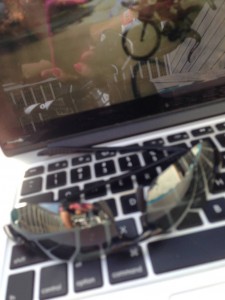 You see, I’ve been a “triathlete” in theory since 1983 when I began spending my college summers in Lousiana. I nannied essentially for my brother and his wife as he worked as a diver offshore for weeks and months at a time. Their two young babies and part time work at a health club filled my summer days. When they didn’t I quickly caught the triathlon bug passed on to me by my then boss and now colleague and friend. Stringing together swimming, biking and running was something I’d never done before. I’d really never get serious about competing for another two decades after but loved the balance of working in all three modes. Supplementing them with weight training, yoga, and movement that involves more rotation and multi-directional focus has kept me more injury free than many of my peers who focus solely on one activity.

t was more than a personal hobby, though. This past two years I was literally watching and pulling for friends and acquaintances. Working as a fitness professional in Boulder, where world class triathletes train, can make an age group triathlete giddy. Miranda Carfrae, “Rinny,” and her husband Tim O’Donnell train in the pool -in the lane next to me at times – and work with my once boss and good friend for strength and conditioning. Rinny is a three-time IM champ and, unfortunately, had to drop out of this year’s race due to complications from an accident three days before IM. Tim, however, took 3rd place in the men’s race. In the women’s race, a large contingency of frequent the locker room changing after a workout as I change to get mine in.

And even that is not why I watch. I watch to see my friend Susan, who is in the 60-64 year old age group. She went to volunteer this year and shared her live updates on Facebook throughout. She shared clips of what really was happening and the excitement of spectators – not even participating – who could feel the experience firsthand. Any age group athlete who does Ironman distance knows this is the experience of a lifetime. It’s daunting – not just because of it’s 140.6-mile day that includes a 2.4-mile open water swim, 112-mile bike ride, and 26.2-mile full marathon. They’ve done that before. But that it happens in the ocean with what can be swells of 8ft, on lava fields that take temps higher when combined with humidity and against crosswinds that can blow you off the road if your mind drifts, to the then marathon after having battled it all.

I watched rooting for 85-year old Lou Hollander who for some reason didn’t finish though he was miles within the finish. He’s famous for saying “you need to go anaerobic every day.” He explains that just even a minute of “sprinting” and recovery between doing it again a few times can make all the difference. Scientifically, he’s right. We lose fast twitch fibers twice as fast as slow as we age. If you only go long and slow or short and slow for that matter, you’ll be losing muscle mass even while you’re exercising. You can get faster, or at the least not lose speed as you age, by moving fast during training.

I watched the swim cut off. For each venue, the swim, bike and the run, there are specific cut off times. If you don’t make them you are forced to withdraw and your day is done. Months and for many a year of training is over and the chance to cross that finish line is no longer yours. What has taken sacrifice daily in some way – financially, relationships, time – is done. For those who love triathlon it is less heartbreaking than you might think. We wouldn’t have it any other way even with the risk of what may happen race day.

As the last swimmers come into the swim finish with seconds to go before cut off the anticipation even through the remote screen is amazing. You are rooting for this person whose been in the water working their way to that finish shoot for 2 hours and 20 minutes. The pros by comparison finish close to an hour or age groupers an hour and a half. The last woman to come out of the water captured the hearts of viewers who wanted to take those last strokes.. and then stand for her in the shallow waters on legs that hadn’t done that for nearly 2 and a half hours. While she did her best to race up the steps she had seconds to beat the clock. She fell 6 seconds short. Her day was done. The 70-year old however appeared on camera to be smiling and so grateful to be there. Perhaps buoyed by the thousands of people watching and clapping, many of whom were crying tears for her, she smiled. There might be another day for her. She’d made it safely to the starting line of Kona- and experience of a lifetime and a story to tell long after.

That is why I watch Ironman championships. And why four hours flew by on the bike while I was doing it. The human body is capable of doing what the human spirit sets out to do. Find your limiters and then bust through them.

Yes, I hear you whispering. But my knees would never take that. I can’t swim. I don’t have time.

Don’t take a literal Ironman as your challenge. Yet, find one that you can be obsessed about. Often I find that those who judge whether something is healthy or not find the things they would never do are the unhealthy things. A body-builder/figure competitor for instance once said to me “I don’t think that’s healthy” in regard to Ironman distance training, not knowing I had done five. Yet, at peak competition a figure competitor won’t eat egg whites because they’re too high in sodium, and females have periods stop and surgeries to enhance their figure. It’s odd what we throw stones at. It’s all dependent on our own life experiences.

Keep an open mind. Not about anyone else’s ability to do something safely, but about your own. Don’t hold you back. Let your spirit choose for you and lead with your heart. When you’re truly engaged in life, concerns about weight, energy, fatigue begin to be distant memories.

Find your inspiration. Jump into your obsession. Expect the nay-sayers. Smile and carry on.