By accident I realized a matcha brand comparison taste test was in order. This post is about my blind test.

Look, it’s no secret that I’ve been a huge fan of Pique Tea for two years. Before that, well it’s about as embarrassing as admitting that when I started using protein powder I didn’t know what I didn’t know. I was totally unaware that I was drinking things daily that were full of chemicals, and components that actually could make my health WORSE. How’s that for a slap in the face?

When the very habits you’re learning, you know just enough about to be dangerous, could be sabotaging you and creating the opposite of the desired effect? I quickly regrouped.

So as soon as I realized, there is a strong chance that the matcha I was using – grabbing random ones off the shelf – could have mold, heavy metals, and or pesticides in it, I started paying attention.

At that point I was just adding it to my smoothies a few times a week. Imagine if I’d been having two mugs to replace my coffee habit every morning like I do now.

I’ve been using matcha for fat burning since I originally shared some research with you, and hosted some tea-experts on the Flipping 50 show, for over 5 years. But… I didn’t know what I didn’t know.

I’ve been a HUGE fan of Pique’s tea line-up for about 2 years. This is now my #1 go-to beverage for hydration, health, focus, and relaxation. I’ve shared some of the herbal options with my mom, because God knows she doesn’t need any more caffeine. It’s listed on my resources page. Anything that appears there goes through a serious, use, love, and trust screening first!

But… the elephant in the room is this. Cost. It’s more. Of course, it is. It’s been quadruple screened for mold, toxins, and pesticides. But… I wanted to know for sure after I had a random different brand just how it stood up (and my taste buds could detect) in a taste test.

What started out as a simple taste test though turned into more when I was going through the process with a 4 matcha brand comparison test. So, here are the details. 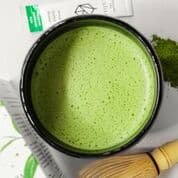 Why the Blind Test? Have I Nothing Better to Do?

In my blind-test last weekend… I used several categories of testing. Tasting was the number one reason I did the test. I’d been given a different one to try, and though I’m a believer of the need to have third-party testing, that only Pique has, I was curious about the taste differences. I wouldn’t say I have very picky tastebuds, but I definitely noticed a difference. So I wanted to check out others.

Another category that emerged was mixing. In comparing one other brand to Pique I quickly realized that they don’t dissolve and mix the same. I don’t care for little green chunks in my matcha! While the drink is mild and smooth, those little pieces are bitter.

That brought me to choose a few other brands at the store. Those few selections I could find 4 years ago by the way, even on the shelves in Boulder, a pretty hip place to be seeking health products, have been joined by at least half a dozen more options. If you’re looking on Amazon (where I’m linking to these other brands just to give you a cost comparison) you’ll find dozens.

Here’s How I Conducted the Test

I lined up mugs on the counter (marked on the bottom). I added a small amount of hot water in the bottom of each mug to warm it, before dumping it out. Then I add the matcha. Then I add the hot water and quickly whisk. Though I do sometimes use a small beverage blender I used a traditional whisk with each of these.

The categories I rated them on included:

What I didn’t test was safety. There’s no contest there. Only Pique quadruple screens. The others? Not one of them mention third-party testing.

One left terrible clumps in the drink that I literally felt in my mouth and tasted.

The others seemed about equal, until the end of the (small) cup.

I used white mugs ceramic mugs by the way. That’s important because although I didn’t intend this to be a category, I really started wanting to taste the difference between four after noticing a difference when I’d been a different brand and noticed a difference. I wanted to know if it was that dramatic for others. But then I saw a big difference in all the mugs when I was done with the samples.

The residue at the bottom of the mugs after for 2 out of the four was like “silt” in two of them, and only slightly better in the third. In the mug later revealed as Pique, it’s still obvious that it was matcha in the mug, but far less and not textured like two of the others.

If we say 4 is no signs of residue in the cup, here’s how they scored

Let me be clear, I’m not a purist. So, for the matcha taste test I did two tests. First, I sipped without “doctoring it up.” It’s the way you’d drink it if you were still fasting in the morning, no stevia, no coconut or almond milk.

Then I did what I normally do. That is, I add a bit of unsweetened, nothing-added organic powdered coconut milk and a dash of powdered stevia.

Here were the results:

What’s Most Important to Me

Okay, sure I’m loving the fat burning potential, but there are other considerations. To me, the most important things about matcha are:

Add those two benefits and you get a long-lasting, stable boost without the irritability and crashes from coffee, and without the cortisol-balance crushing effects from caffeinated coffee.

All my friends (even former coffee junkies) and expert colleagues agree. We’re not alone, either!

Pique teas stand out from the competition because they have up to 12x the antioxidants of other teas, exceed the USDA organic standard, and they’re Triple Toxin Screened for pesticides, heavy metal, and mold. So, you’re getting the most concentrated, pure and convenient beverage with each brew!

Pique has teas for every type of person, situation, and time of day…here is my all-time favorite:

And of course, there are plenty of other amazing options, for tea beginners or connoisseurs alike! If you’re a tea drinker, you’ll love them.

Use this link to get a discount for Flipping50 community members. 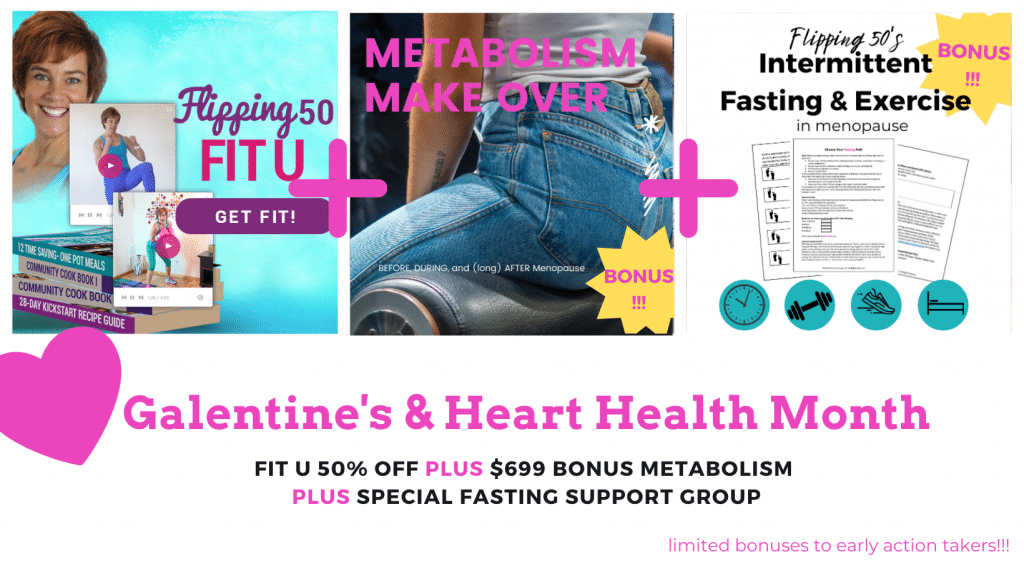 Looking for support with fat burning? During February 2021 Fit-U is available for 50% off.  Plus bonuses: