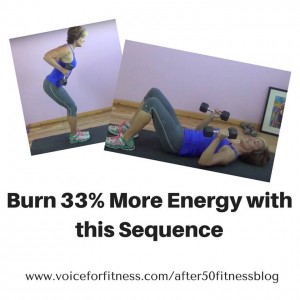 It’s no secret that weight training is a must after 50. Without it you’ll be fatter, sicker, weaker and more dependent on others sooner or later in your life.

If you’re already a believer, are you making the most of your weight lifting time? A recent study in the Journal of Strength and Conditioning Research compared supersets to traditional exercise (often done with a random sequence of 8-10 exercises in a circuit repeated for multiple sets).

In the study those who did super sets burned 33% more calories total. The total calories included those burned during exercise and in the Excess Post-Exercise Oxygen Consumption (EPOC). The level of hormones in the subjects blood indicated that the intensity of performing the specific superset sequence was much  higher even if the same work was done in a different order.

Sequence is everything. One of the first of four videos in my new home exercise video seriesfeatures this metabolism boosting format for just this reason.

There are different ways to put together exercises. Even if you choose supersets as a protocol that is true. In this particular study, the one we’re motivated to try because of the extra benefits, supersets use exercises that target opposing muscles groups. Appropriate pairs follow:

Each pair of exercises was done four times in the study. The weight was about 70% of maximum (and no one tests that! for safety we know that 80% is 10 repetitions so the number in the study was 15). That is also a good starting weight. Find a weight that does cause fatigue at 15 repetitions.

Starting out? Don’t jump in and do four sets of anything! Not even three. One set has been shown to be beneficial to newbies. Do one set for a couple weeks, leaving 48 hours (Mon and Wed) or more (Mon and Thurs) between weights. End your session feeling you could have done more. Then increase to two sets. Repeat that for two weeks and so on until you reach four sets.

Between your pairs of exercise rest a minute.

Make the most of your exercise. Get some variety into your current routine. A change is always motivating and fresh. If you know the exercises it’s just a matter of moving them around. If you need a demonstration and cues for proper technique, you’ll like this.

If you have questions or comments add them here.