Thai coconut fish chowder is a variation of a coconut chicken chowder I made a couple weeks ago. I find both soup meals and fish meals feel “lighter” for me and digest better. There’s less estrogen connection with fish and it may be the reason many of my clients feel better when they eat a fish dominant diet – though they can tire of it if it’s all they eat in our elimination phase! The other soup recipes I’ve used generally feature seafood and it can be a challenge to have shrimp be just right and not rubbery. Cod is so easy and not “fishy” for those who are sensitive to that!

This is an amazing substitute for a cream-based style soup. You have all the rich tasting goodness without the dairy or soy.  Fresh grated ginger and cilantro make a difference! You could do without in a pinch and use the dried version of each but it’s worth the effort! As with most soups the next day flavor is that much better.

I baked my cod at 400 degrees 20 minutes first and did the same to roast the sweet potato before adding to the soup to reduce cook time. You can instead add the potatoes with the celery, onions and garlic. I prefer them softer and season them with sea salt eliminating need to add salt later. 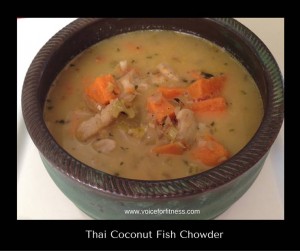 In a large stockpot heat the coconut oil and add the celery, garlic and onions. Cook for about 10 minutes until soft and add the cooked potatoes at the end. Add cilantro, ginger, and lemongrass if using and cook for a minute while stirring.

Pour in the chicken stock and increase heat to boil. Reduce to a simmer, cover and cook 10 minutes. Add the fish, coconut milk, lime juice and red pepper flakes along with sea salt and pepper to taste.

Simmer 5 more minutes. Serves 4-6 and is a great leftover lunch.

Next week: Do you love a taco salad? But hate the sodium, artificial flavoring coloring and preservatives that leave you bloated? Or need a crunch but know you don’t need corn chips or those walking taco versions of carbage? Got you covered.